EK Plans to Save the World 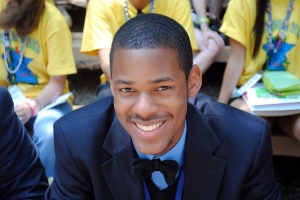 On Sunday afternoon, Ikechukwu “EK” Umez-Eronini, one of this year’s presiding officers (PO), talked candidly about his CONA experience. Impressively, EK only spent one year at CONA before being selected as a PO, whereas POs typically spend a few years on the Mountain before their selection as a conference leader.

“I can’t even begin to describe what a unique experience it was coming here, where you can debate and talk about issues and no one takes it personally at the end of the day,”  said EK. He has never had a similar experience anywhere else, he said.

PROPOSALS
Last year, EK presented a proposal that dealt with abortion in which he defined life as beginning at the heartbeat, or the first two weeks of pregnancy. According to his proposal, which made it as far as the Plenary Session, if a woman chose to have an abortion before then, it would be legal; however, once the heart beat, no abortion would be allowed.

This year, Proposal No. 0485 by Syon Link of Wisconsin caught EK’s attention. This proposal, which deals with overpopulation in the United States, gives “each citizen of the United States one credit that allows them to have a child that will qualify for current tax deductions.” Anyone who does not wish to use their credit may sell or trade it. EK said this proposal stood out to him because “it’s really interesting. I never thought you could apply cap and trade to people.”

ADVICE
Aside from the advice he offered in Opening Session, EK wishes to encourage this year’s delegates to speak on anything and everything, and to take full advantage of the experience and opportunity many people will never have.

“I know the first few committees can be boring,” he said, “but if you’re up talking, even if you’re debating yourself, all of a sudden you’ve entertained the group. If you get that practice in, before you know it, you’re talking about everything, whether you’ve prepared a speech or not.”

AMBITIONS
Currently, EK attends George Washington University in Washington, D.C., where he is studying business with a concentration in business economics and public policy. Once he finishes school, EK plans to save the world. First, though, he wants to practice law, specifically dealing with education or civil rights, go into D.C. politics and eventually become the mayor of D.C.

FAVORITES
His favorite color is green and his favorite type of Eureka Treat is the Sammy T, which he described as “the kind with the pieces of Heath Bar and Snickers and Butterfinger all mixed in this vanilla cacophony of goodness.” His preferred mode of transportation is the BMW – Bus, Metro and Walking. If you get a chance, be sure to stop EK or any of the other POs to say “Hi,” and let them know how your week is going! And remember to keep the committee discussions lively!